Usually, when we plan on travelling to another country, we tend to focus on a destination that piques our interest, and Marrakech is guaranteed to grab your attention with its luxurious lifestyle and the authentic Moroccan ambience it presents to tourists. The city boasts multiple souks, generously embellished palaces and a number of cultural heritage. Many travellers who have visited Marrakech have, in fact, deemed it the cultural capital of Morocco. So, no wonder it is among the most sought-after cities to visit in the country. However, there are some unusual and interesting things about Marrakech, that you ought to know that will prompt you to plan your trip to the popular Red City.

In today’s day and age, there are no shortages of bi or tri-lingual countries, but a whole city that is trilingual is a very rare sight. Interestingly Marrakech shines brightly among them with three main spoken languages. The three main languages used in Marrakech for day-to-day communication are Arabic, French, and Amazigh. 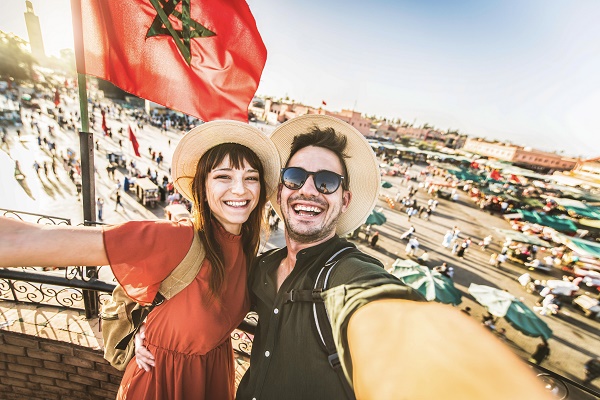 Since the French occupied Morocco in the early 20th century, many locals are still fluent in that language. A subdivision of Amazigh, a lesser-known set of languages, is used by a tribe of Berber people settled in Marrakech.

A popular Hollywood movie from the 1950’s “The Man Who Knew Too Much” was filmed at Mamounia Hotel in Marrakech. Even some parts of recent popular franchises like “Sex and the City 2” and “Mission Impossible –  Rogue Nation” were shot in the past decade at the Taj Palace and Marrakech Stadium respectively.

Similarly, throughout the years Marrakech has beautifully played the part of a stunning background in many big-budget Hollywood Movies. A good number of talented and creative visionaries often seek out this city as a source of inspiration for their films.

In many countries in North Africa, the word Medina refers to the old part of the city confined by tall walls, narrow streets, fountains, palaces and mosques. Marrakech is also the home of a fine architectural masterpiece like that which was declared a UNESCO World Heritage site in 1985. 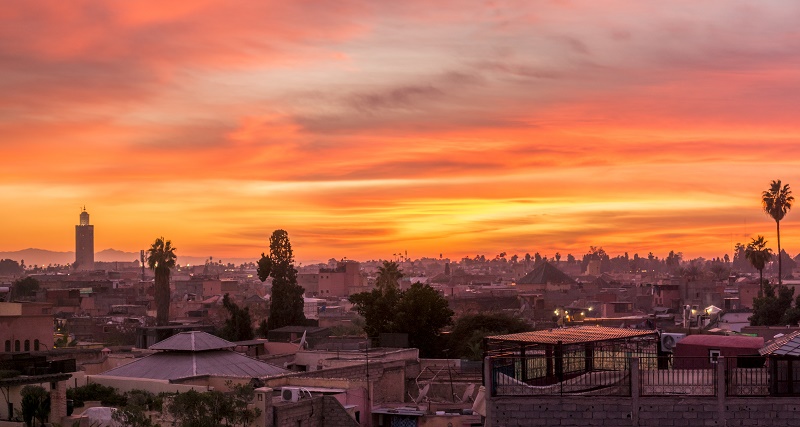 Dating back to the 11th century, Marrakech’s medina boasts a 77m high minaret of the Koutoubia mosque which serves as a key monument of Islamic architecture in the city. Other than that, the ramparts, gates, Bahia Palace, Saadian tombs and so much more are waiting to be explored here.

Marrakech is a destination which you will recommend to your loved ones, once you get the taste of it. And this is also the case for former U.S. president Winston Churchill. After the 1943 Casablanca Conference During WWII, Churchill told Roosevelt: “You cannot come all the way to North Africa without seeing Marrakech”. Which led Roosevelt to drive all the way from Casablanca to Marrakech with Churchill.

This trip gave Churchill, an avid painter, the opportunity to paint the Tower of Koutoubia Mosque, which was recently sold for a whopping $11.5 million by the Hollywood actress Angelina Jolie.

Once a Capital of Morocco

Up until the 20th century, Morocco was known as the Kingdom of Marrakech since the city of Marrakech is often referred to as the capital of the country. 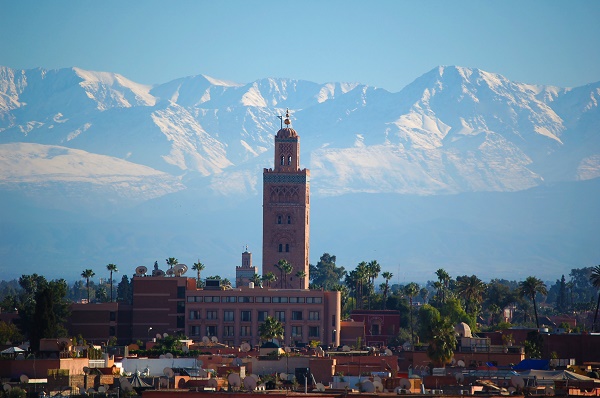 Technically speaking, Marrakech was one of the four capitals of Morocco, along with Fes, Rabat and Meknes. Even though that has changed and Rabat took the crown for itself, Marrakech is still one of its four imperial cities.

The name of the historic city has two origins, one of which is rooted in the Berber phrase “Murr Akush” meaning “the land of God”. Another theory suggests the origin is related to the Arabic word, “Murra kish”, meaning “to pass by quickly”.

Some say that the latter was a warning to the travellers to watch out for thieves and wild animals in the city. However, from a tourism point of view the meaning of “the land of God” would be more alluring to the tourists.

Marrakech is also popular for the copious amount of palm trees found everywhere. When you visit the city, palm trees are among the few things you will come by very often. 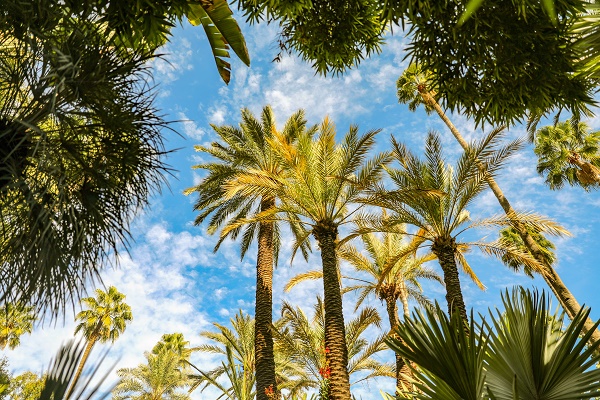 They are literally everywhere, even in the middle of the highways. And what is more interesting is that it is illegal to cut down Palm Trees in the city and doing so will result in a fine of EUR 500.

The city has a pinkish-red hue enveloping the walls, buildings and ramparts of the city. They were the result of being constructed from clay and chalk, which are common materials used in the building process. And thus the city has earned the nickname “Red City”. 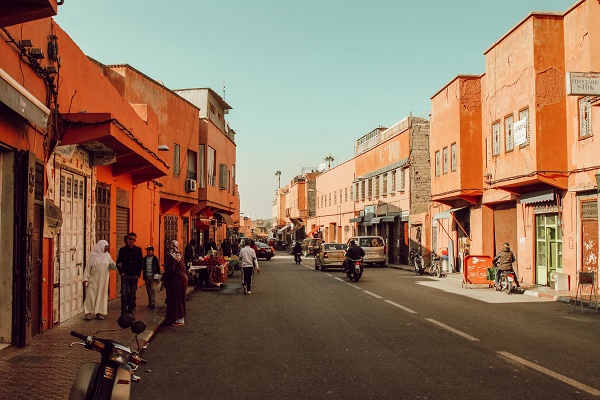 This traditional technique has been used for centuries to protect buildings from the hot sun and strong winds in the desert region. Additionally, the city’s central square, Djemaa el-Fna, is surrounded by red buildings, which also contributes to the nickname. The red colour also symbolises the city’s history and culture, making it a popular destination for tourists.

The Museum of Photography

One of the main attractions of the Medina of Marrakech is the museum of photography. This museum holds a very impressive collection of present-day as well as ancient artefacts which highlight the beauty along with the rich history of Morocco.

It is home to thousands of pictures from the world’s top photographers. The images of the famous landmarks of Morocco captured from different angles are showcased in this museum. The collection held within this edifice tells the tale of a glorious Moroccan history dating back centuries.

If one has to note down a general drink of the people of Marrakech, then without a second thought they will think of sweet mint tea. Moroccan love a nice serving of mint tea so much so that it is considered a part of their culture. This is why Moroccans see tea-making as an art. 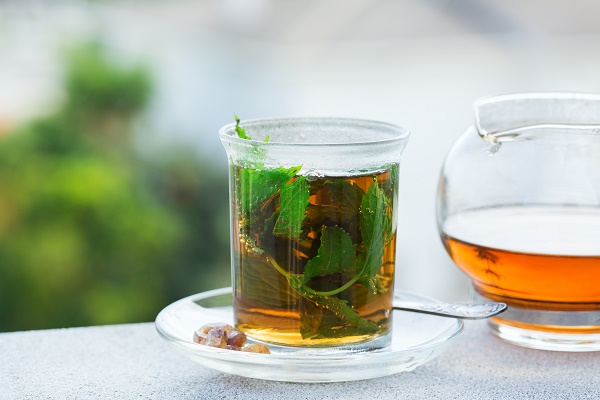 Their tea is served from a stylish long-neck jug in a small glass and not a day goes by without having tea in such a fancy way. There will never be a shortage of tea in Marrakech.

The City Of Cats

Another common view in Marrakech is cats and the sheer number of cats you will be able to catch just relaxing or strolling by the streets will astound you. Some may be strays and others live in the shops, but all of them are well-fed by people there. 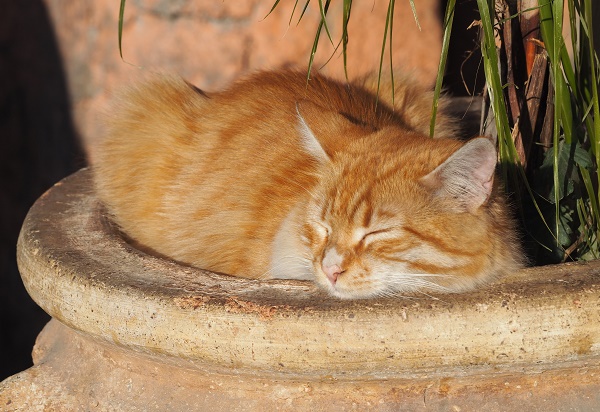 The Moroccans themselves are cat lovers, so cats can cruise through the city without being harmed. Thus, this place can also is the perfect tourist spot for visitors who also love cats.

If you love travelling or learning unusual facts about different travel destinations, then keep your eyes on our website for the latest travel news and more interesting facts about fascinating places all over the world.